Doges on Trial, our first cryptoeconomic experiment on the Ethereum mainnet is based on Kleros’ curated list application, a key area of research within the decentralized ecosystem.

The Dogelist experiment has been running for nearly two months now. For this reason, we want to draw your attention to a large and important attack that is currently running and we need all our jurors to help.

So let's study the ins and outs of this attack.

A message from Eve, The P+Epsilon Attacker

"Basically, if you are a juror in the LAST APPEAL ROUND of this case, if you vote that this image is a Doge, one of two things will happen.

1) the result will be a ruling that is a Doge, and you will be coherent, so you will keep your 200 PNK deposit and maybe get a coherent reward from the incoherent jurors or

2) the ruling will be that this is not a Doge. In the latter case, where you are incoherent with the court, I will pay you your lost deposit back plus whatever you would have gotten as a coherent reward if you had voted “Not Doge” plus an additional 300 PNK!

Of course, we don’t know in advance which round will be the last round unless and until we get to the FIFTH APPEAL ROUND (as maxAppeals=5, i.e. a case can only be appealed five times).

So, if you are a juror in the fifth appeal round and you vote “Doge” you know you can’t lose! Whereas if you vote “Not Doge” and enough other people are swayed by my offer that “Doge” wins, well you will lose your deposit and miss out on potential rewards.

Even if you are a juror in appeal round 4 or before, you should reason out that either 1) the case will end in that round in which case the “can’t lose” strategy is to vote “Doge” or 2) the case will be appealed and the jurors who make the ultimate ruling that determines whether you are coherent or not will be able to get my bribes and may be swayed into voting “Doge.” So you might still want to vote “Doge” as well to be coherent with them.

But don’t take my word for it. You can see the following smart contract that I will post below that guarantees that I will pay out like I say I will. Note that the bribe contract will have enough PNK to preform the required bribes all the way to the fifth appeal round (so there will be enough PNK to pay out even in the case of the maximum number of appeals).

Again my offer is only valid for the jurors in the last round of the first dispute raised on this image (which should start in session 11 and if the case is appealed up to the five times it can be appealed, it would continue through sessions 12, 13, 14, 15, and 16). If the image wins the dispute and is later rechallenged, my offer does not extend to the jurors in those subsequent challenges.

What does it all mean?

Jurors who participate in the final ruling of this case, up to 127 of them will choose whether the appealed image is a Doge or not. Eve, the representative of Moonpie(TM) proposes that everyone votes "Doge", promising the return of deposited PNK, arbitration fees to dissenting jurors if the ruling ends with "not Doge" and 300 PNK on top of that. On the other hand, if the image wins its' place with the Doges, everyone will be distributed their funds and arbitration fees by the system and Eve will not fire off the bribe contract.

The case has been appealed three times already, so Eve seems to be ready to keep appealing and take us deep into the rabbit hole of the maximum number of rounds a dispute can last. To protect our Doges, we'll need a whole lot of jurors ready to arbitrate the case. As noted in the Dogenomics piece, our jurors expand in number  (double the number of jurors in the last round + 1) with each round. The list below explains the numbers.

For a visual representation of how this looks and the whole juror process consult the infographic below.

Can I help to stop this callous attack on our system?

Fire up your PNK, load them into our juror panel as described in this video. Once you've done that our Random Number Generator (RNG) will pick out the jurors ready to arbitrate in final round of appeal. Normally, it is not guaranteed that you will be chosen in a dispute. Here, the chances are much much higher due to the number of jurors needed.

We need ALL OUR JURORS to get involved here. It will be a decentralized juror party of sorts. You'll never meet IRL but you will be able to say you've taken part in...

The largest decentralized justice ruling EVER. 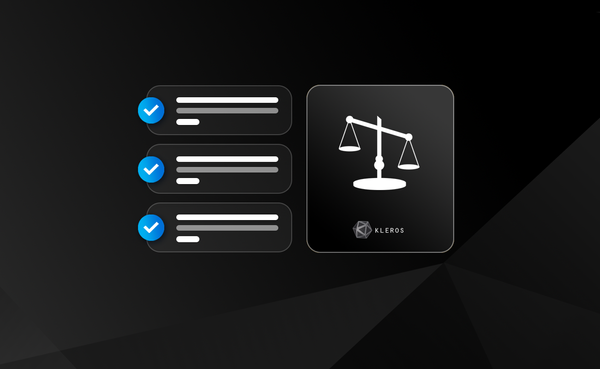 A clear explanation of what curated lists are and their role as a building block in cryptoeconomic systems.

Now that Kleros has launched on the mainnet, we have received a number of questions about how this will actually work from a technical point of view: how to integrate 3rd party platforms with our protocol?