In her own words, a combination of 'hippie anarchism and economic liberalism beefed up with lots of technological determinism'.

As a computer scientist interested in political philosophy and community lead at Agoric (a project founded by Mark Miller, one of the architects of the legendary Project Xanadu), Kate is a humanist in the blockchain space. Here's an exciting discussion about blockchain and the future of governance and social orders.

How did you start with blockchain? What got you into the technology?

Some people have this ‘road to Damascus’ kind of story, where all of a sudden they realized things. I don’t really have a moment like that. When Bitcoin came out, I don’t remember there being much interest from the computer science department at Berkeley.

It was really from a libertarian view that I got interested in Bitcoin. It was probably in 2013 that I started buying Bitcoin because I thought it was interesting. I didn’t really do anything with it, I was just being around to see what would happen.

What really started to interest me was when Ethereum came around. With Ethereum, you could build your own democracy, you could have on-chain voting if you wanted. It really seemed like it opened up the design space for governance.

So, it was from that point I started to really dig down into this. This was not just about cryptocurrency. You can build institutions with this technology.

You mentioned your interest in political philosophy. What authors did you research?

I really like Robert Nozick. Another is John Rawls, for example. James Buchanan and Gordon Tullock have a great book called ‘The Calculus of Consent’. Tullock comes from a legal background and Buchanan is an economist, but I really think this book is about political philosophy.

*Author's note: If you'd like to know more about this topic, a virtual plethora of knowledge can be found at Harvard's Michael Sandel's famous EDX course on justice.

I come from a quite similar background. I studied economics and philosophy, so I read a lot from Rawls. I became interested into blockchain because of political philosophy: its potential to reinvent old institutions. Can you tell me a little bit how you got into institutional economics and what’s the connection you see to blockchain?

There is this paper Economics of Blockchain by Jason Potts, Sinclair Davidson and Primavera De Filippi. That paper really made me see the connections between blockchain and institutional economics. It was Sinclair Davidson presenting at a Berkeley cryptoeconomics conference that really opened my eyes.

I remember talking to people afterwards and they didn’t get my sense of how great the presentation was. People coming from computer science or trading cryptocurrency didn’t really seem to be getting it, but for me it was really an eye opener.

What is most interesting to me is using a blockchain, especially for smart contracts, to replace some institutions or improve institutions where we would usually rely on governments. Especially given that there is very little access to justice, even amongst the societies where we feel we have very strong institutions.

If I wanted to make an agreement with someone and I wanted to enforce that; there is very little chance, even in the US, that I would manage to get that to court, that it would be worth my while. What I think is most fascinating is being able to use code and blockchain for those sorts of solutions.

Douglass North has this great concept in the book ‘Violence and Social Orders’, of stages of society. When we had serfs living on the land of lords, it was one stage, then we fought for equality, that was another stage.

We can make a comparison between that and the internet. We are in the pre-institutional part of the internet.

We didn’t have cryptocurrencies for a very long time, so what we could do on the internet was pretty much for the most part communicate with each other. If we were using PayPal, we could try to transact, but only with an in-house currency. It wasn’t something we could actually own or control ourselves.

I see this stage of the internet as being an underdeveloped and pre-institutional stage that Douglass North was talking about.

We are at a stage where we can actually start to create some of those institutions and we are going to see the same expansion of commerce and society that we saw in the brick and mortar world in the past centuries.

Author's note: If you'd like to know more about this topic, read the interview we did with Stanford's professor Barry Weingast, who coauthored Violence and Social Orders with Douglass North.

I always use this metaphor about the stage of the internet. It started by being some kind of spread apart pieces. Then it started to consolidate into absolute monarchies, as when Europe went from feudalism into a centralized government in the 17th century. We are at the stage of the internet which might be called "the Facebook era". It's like we live under a monarchy and we are all subjects of this very big global state.

We’re the vassals and Facebook is really controlling the territory at this point.

I also say that we, the people working on blockchain, are like the revolutionaries of the 18th century - we are trying to figure out what is the best way to govern these decentralized internet institutions, just as the Federalists in the 18th Century were trying to figure out what were the best institutions for a big democracy like the United States. They did not have any previous experience, they did not know how millions could live in a state without power ending up concentrated in just a few hands. They were the cryptoeconomists of their time...

I really think we are at a comparable time. I feel it sounds crazy to people right now, to try to design the governance space, because we really haven’t seen that since, maybe, James Madison. It’s really only been very recently in the blockchain space that this exists at all. People just take governance for granted.

Corporate governance is an exception. People have been thinking about it for a long time and that makes quite a bit of difference, but outside of corporate governance, this is a very new area and it will take the same amount of innovation as the founding of the US. It’s very promising.

What are you working on now?

I work for a startup named Agoric. We do secure smart contracts. By that, I mean the original concept of smart contracts, where it is the arrangements in code that allow people to enforce agreements.

People sometimes ask: “Is this code on the blockchain or is it a legal contract?”. I have to respond that it’s not either of those necessarily. Originally, a smart contract could run on a single server, could run on a quorum of servers, now it can run on a blockchain, which is great, because then you have better guarantees about what is actually running.

But, the point of it was not just that it’s code on the blockchain, it’s that you’re actually trying to enforce certain arrangements. People like Gillian Hadfield, Bruce Benson and David Friedman have shown that contract law was originally private law.

Someone in a country with poor institutions, in many countries where they don’t have access to contract law enforcement would actually be able to get a business loan or start a new business or transact in an eBay scenario online or any number of things that we probably don’t even know about yet. They’re able to do that online with smart contracts.

A number of the founders of Agoric have been thinking about smart contracts for decades, almost thirty years, so they were in initial discussions with Nick Szabo. They have written papers on it prior to blockchain and that’s what we’re working on, trying to build a world in which we can bring the world economy online, where people feel safe enough that their money and contracts are secure that they can use them for commerce and not just for communication.

Could you recommend a couple of books to our readers to learn more about what we discussed?

Choosing in Groups by Mike and Kevin Munger is a great introduction. It goes over the entire design space of governance and has nothing to do with blockchain. If you’re trying to learn how to design governance in the blockchain space it really helps to go to the experts in the field.

I also really love Douglass North’s Violence and Social Orders, it’s really insightful for where we are in terms of the internet right now. Gillian Hadfield and her book Rules for a Flat World is also a must-read.

Before you go... interested in becoming a Kleros Juror? 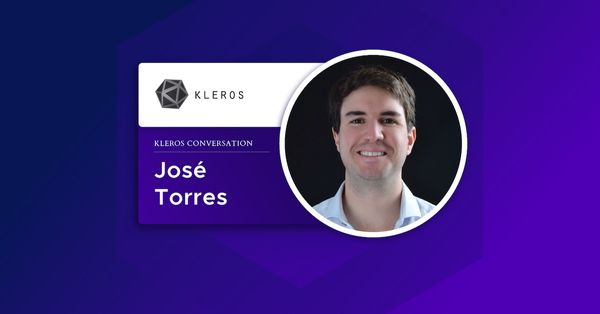 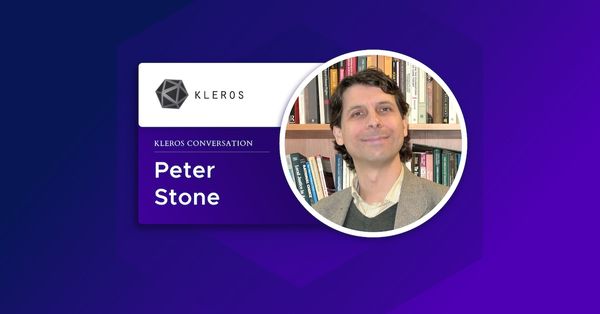 In this week's rendition of the Kleros Interviews, we bring you an exciting talk with one of the world's leading experts on sortition as a political tool - Dr. Peter Stone of Trinity College in Dublin.